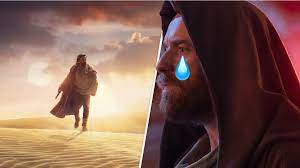 Original Story of ‘Obi Wan Kenobi’ Was Much More Pessimistic

Original Story of ‘Obi Wan Kenobi’ Was Much More Pessimistic

The episode takes place ten years after Episode 3: Revenge Of The Sith, with our hero hiding in Tatooine to protect Luke Skywalker. A squad of Inquisitors are actually ex-Jedi who were tempted to believe the Empire’s promises and are now looking for Jedi who has remained on the right side of the force.

Ewan McGregor, the Jedi Master who portrayed Obi-Wan in the prequel movies, said Obi-Wan was lost in an interview with Entertainment Weekly. After what happened to the Jedi Order at the end of Episode 3, and also the events with Anakin, he is a broken man. He feels immense guilt and responsibility for this.

Although this description of Obi Wan’s mental state sounds fatalistic, it turns that the original script explored deeper into the Jedi’s mind. Kathleen Kennedy, one of the show’s executive producers, stated that Hossein Amin’s portrayal of Obi-Wan was too bleak. Kennedy stated that they are trying to create a positive, uplifting story. It’s difficult when you start with a character in the same state as Obi-Wan in leaving Revenge of the Sith. It’s a very dark period. It’s impossible to wave your magic wand at any writer and get a story that reflects what you feel.

Kennedy decided to end production and begin with Joby Harold, a screenwriter who stated that Obi-Wan was his “obsession”. He said, “When we last saw Obi Wan in the prequels he was very emotional.” He has a passion for life. He is the Zen master when we see him again in The New Hope. This was the story I wanted to know — the difference between Obi-Wan and Sir Alec Guinness, the man Ewan brought to life.

It’s not to say it will be all sunshine and rainbows. Deborah Chow, the director, said that while some elements of the original script were inherited by her, she made significant changes to it and added a few new elements.