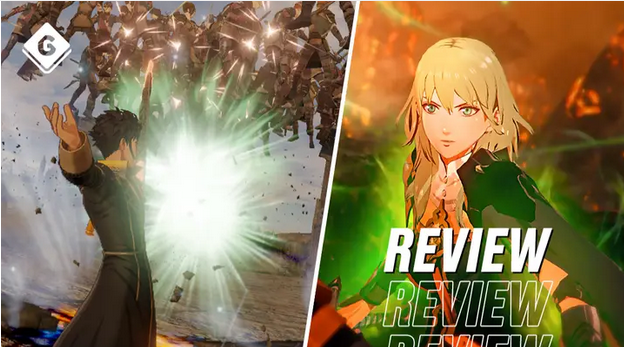 I am in a peaceful forest scene and chatting with Edelgard von Hresvelg (Empress of the Adrestian Imperial). Each question she asks me, I answer to my satisfaction. Our perfect conversation ends with me giving her a stuffed bear doll which she loves. We’re soon off to another battlefield, crowded to the brim with enemy soldiers, within minutes of returning to camp. As the bonds I have made with my fellow teammates strengthen us, the slice-of-life RPG elements are always present in my mind. This is what makes Fire Emblem Warriors: Three Hopes so compelling.

In our preview, I discussed how Fire Emblem Warriors feels closer to its source material than most of Omega Force’s other collaborations. Hyrule Warriors: Age of Calamity is, in many ways, a Zelda-style game. However, it doesn’t have the same variety of characters, locations, and aesthetics as the Nintendo series that it’s based on. Three Hopes has the same ingredients as Fire Emblem and makes hours of playing feel like minutes.

The combat is an incredibly radical departure from traditional Fire Emblem game tactical grid-based strategy, but hack-and-slash battles make up only a small part of Three Hopes.

You can choose how much role-playing and life simulation you want to include in your game’s downtime. If you’re feeling adventurous, you can jump into an epic fight. But, for those who don’t mind, there are many characters you can talk to, cook with, do chores with and train with.

This social aspect is fun and can help you improve your characters’ stats and bond levels. This will affect how your characters work together and give you an advantage during missions.

You should also note that Fire Emblem Warriors has various playable characters. You can swap between up to four characters at once in battles. This list is much larger than I realized, and you can expand it by recruiting enemies rather than routing them. You can choose to be kind or not, but Garreg Mach is more joyful than one sinner who repents, to paraphrase a man from a well-known book.

My experience is that it’s better to save as many people as possible. The most rewarding part of Three Hopes is, without a doubt, its social component. You will find it fascinating to see how cutscenes are played out, and there is a lot of dialogue. This makes it even more compelling when you unlock support conversations which allow you to express yourself through your responses.

These moments are reminiscent of Stardew Valley, Sakura Wars and Persona, which allow you to enjoy a world that feels real, despite its apparent artificiality. You’ll treasure the memories of seeing your friends express joy over a meal you prepared or having them share their vulnerability with you during intimate conversations.

Because of the variety in Fire Emblem Warriors, I said “for the first time” because it is so important to replay the game. There are many options to choose from, multiple strategies to use, different combat classes to use, and many characters to get familiar with. You can also earn a signature piece by completing your relationship with someone and giving them the key item. These items are limited in number, so it will take some time to unlock them. I had played the game for 30 hours and only beat it once.

This game has me hooked, even though I left some things out. Fire Emblem Warriorsprovides an engaging narrative that hits hard at points and shows how war is a tragedy in the first place. It is not easy to see allies make enemies for their ideals. This human element marks key victories and creates an ennui that gets under your skin.

Even though you are playing in the ‘Casual” setting, which protects your friends from permadeath, there are still sobering moments and the effects on other characters. It’s not all bad news. You’re often reminded of the work ahead with inspirational words from your fearless leader, which was Edelgard in my case.