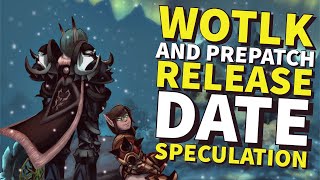 WORLD OF WARCRAFT – WOTLK CLASSIC PREPATCH RELEASED DATE – WHAT DO YOU NEED TO KNOW?

WORLD OF WARCRAFT – WOTLK CLASSIC PREPATCH RELEASED DATE – WHAT DO YOU NEED TO KNOW?

World of Warcraft Wrath of the Lich King Classic will be available in 2022. This is the official return of what many consider the MMORPG’s most loved expansion. The pre-patch release date is the first step in our quest to Northrend. This will allow us to prepare our characters to fight Arthas’ minions.

WoW: WotLK’s Pre-Patch Release Date also marks the first time we will be able to play the MMORPG’s first-ever hero character, the Death Knight. You can now create your first Death Knight, even if you don’t have a level 55 character, following Blizzard’s shift in the philosophy of implementing changes.

The developer officially revealed the expansion in April and confirmed that it would launch sometime in 2022. Players can opt-in for the inevitable beta, but no WoW: WotLK pre-patch release date has been revealed.

The official release date for the expansion is unknown. However, Blizzard might have accidentally published the listing on their official website on September 26, 2022.

Although the listing was quickly removed, Wowhead could see the date before Blizzard could take it down.

The pre-patch will likely be completed between 2 and 4 weeks before launch. However, the developer is yet to provide details.

The pre-patch for Burning Crusade Classic went live two weeks before the June launch. WoW, Classic was released in August 2019.

We wouldn’t be surprised to find Wrath of the Lich King classic go live in August or September, given that WoW will also launch later this year. The pre-patch for the release will be available two weeks before.

We will have to wait to hear from Blizzard about the WoW pre-patch release dates, but we can probably assume that it won’t be too long.

Advertisement
WORLD OF WARCRAFT – WOTLK CLASSIC PREPATCH RELEASED DATE – WHAT DO YOU NEED TO KNOW?