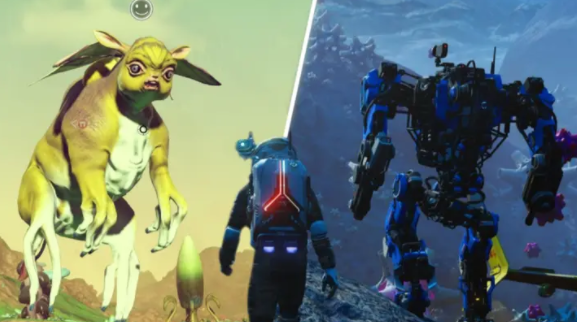 Sean Murray says that ‘No Man’s Sky’ isn’t over “by a long shot”.

Sean Murray says that ‘No Man’s Sky’ isn’t over “by a long shot”.

No Man’s Sky released 2016 to disappointment. It was because Sean Murray, the founder of Hello Games, promised a lot of features at launch but was simply not able to deliver. Promises of gameplay elements like thousands of alien types turned out to be procedurally generated nightmares. Aliens trusting or turning on you is possible only if they have the mind and brain of a dog. Being able to see other players in Journey was complete fiction.

No Man’s Sky managed to make the comeback that everyone dreams of, unlike almost all other games which launch only to disappoint. This update will be their 19th major in six years. They have delivered on all of their promises. The Beyond update in 2019 created a new game. The 2021 Prism update made the game look exactly like it was promised at launch. People noticed and soon after, No Man’s Sky‘s reviews changed from being overwhelmingly negative to most positively.

You can see the progress of the game by checking out the Expedition 4 Emergence update.

Hello, Games is currently working on another project, which it will not talk about. Murray claims to have learned his lesson from No Man’s Sky. Murray claims that despite being working on the next big thing in an interview with IGN, there are still “bucket lists items” and “finer details” to fill out with their turnaround titles.

Murray stated that despite the many updates since launch, and the many items on our bucket list [that] we have checked off, our list is never getting shorter. I like to think No Man’s Sky has such a huge game that we need to paint with broad brush strokes. Each update fills in more detail, but also creates new broad strokes.

Sentinel will be a major update that will improve combat and enemies. Hello Games seems to be building on the foundation of the game, rather than venturing into unknown territories.

Advertisement
Sean Murray says that ‘No Man’s Sky’ isn’t over “by a long shot”.