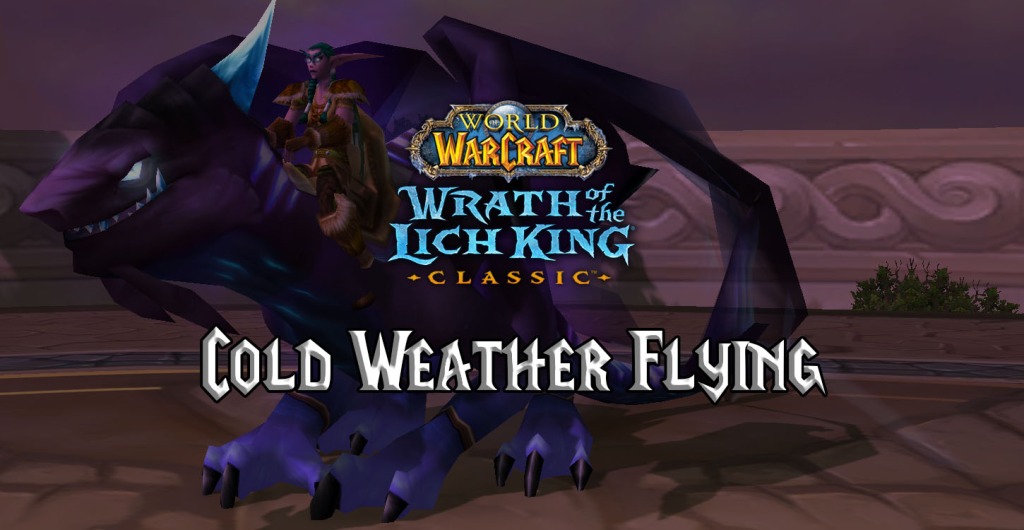 WoW WoTLK Classic: How to Get Cold Weather Flying

Warriors are not afraid.

Cold Weather Flying is a skill that allows players to fly into Northrend in World of Warcraft: Wrath of The Lich King Classic. Those who have a WoTLK Classic gold can get this particular skill. This guide will help players who seek this skill and tell you how to qualify and train for the skill.

How World of Warcraft Has Evolved

A video game developed and published by Blizzard Entertainment, Warcraft is a video game franchise focusing on real-time strategy and a massively multiplayer online roleplaying game. Warcraft has already expanded to have novels and other forms of media that Blizzard Entertainment also makes. The series comprises five games: Warcraft: Orcs and Humans, Warcraft II: Tides of Darkness, Warcraft III: Reign of Choas, World of Warcraft, and Hearthstone.

The fourth title, World of Warcraft, is Blizzard’s best-selling title as it is a massively multiplayer online roleplaying game, or MMORPG for short. Players can control their characters and farm WoTLK Classic gold while interacting with each other in a virtual world. With an extensive player base, it became one of the highest-grossing video game franchises. World of Warcraft has multiple expansions, such as The Burning Crusade, Wrath of the Lich King, Cataclysm, Mists of Pandaria, and much more.

World of Warcraft: Wrath of The Lich King in a Nutshell

The shores of the freezing yet beautiful continent, Northrend. This area is also known as “the roof of the world” and “the crown of Azeroth.” Northrend is an infamous frozen wasteland and lies far up north of Azeroth. Its harsh cold weather is too freezing for your WoW WoTLK flying mount under the conditions of Northrend. In this situation, Cold Weather Flying comes in handy to use your mount, as, without it, your mount will become sluggish and unable to fly.

Cold Weather Flying allows your flying mount or Druid flight form to fly freely in Northrend. Your character must meet the following requirements:

How to Get WoW WoTLK Cold Weather Flying

For you to be able to learn Cold Weather Flying, you can visit one of the trainers available.

When teaching Cold Weather Flying, these trainers can teach up through Master Riding but do not buy anything else but Cold Weather Flying from them. It’s best to find a flight trainer who can provide the best faction prices instead.

After learning Cold Weather Flying and reaching level 80, WoTLK Classic account owners can purchase a WoLTK item called Tome of Cold Weather Flight from Hira Showdown for 1000 gold. Once your first character purchases this item, you can mail it to one of your alternative characters to learn it as early as level 68!

The item is Bind on Account, meaning you can send this to any of the characters under your Battle.net ID. The cost is the same as learning it from a trainer, but this way, your alternate characters have an advantage and can fly right away. Remember that players can only use the Tome of Cold Weather Flight item once, and you would need to buy this item for every alternate character you want to level through Northrend and allow them to fly.

What If You Don’t Have WoW WoTLK Cold Weather Flying?

If your character is at least level 77 without Cold Weather Flying, alternatively, you can visit “Honest” Max, who can be found at K3 in Storm Peaks at /way 40.6 84. 6. Max will give you either a Loaned Gryphon Reins (Alliance) or a Loaned Wind Rider Reins (Horde). These mounts have an average flying speed within areas like Storm Peaks, Sholazar Basin, and Icecrown. However, once you learn Cold Weather Flying, you can no longer use it.

Hopefully, this guide has provided the information you need to learn Cold Weather Flying for the character in your WoTLK Classic account. Best of luck to you, adventurer; the fate of Azeroth rests in your hands!