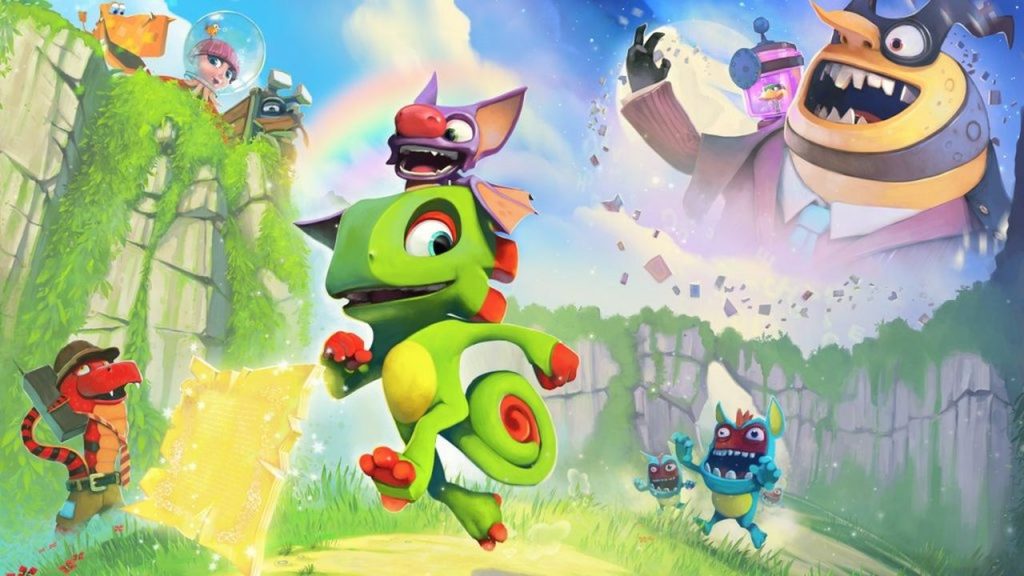 Yooka-Laylee is one of the best computer game Kickstarter. The venture started as a Kickstarter that initially had a littler extension yet on account of the consideration of fans and the way that a portion of the ex-Rare engineers – who additionally took a shot at the absolute most persuasive platformers for Nintendo 64, were behind this task – enabled the game to surpass its unique Kickstarter target extending the extent of the game.

Yooka-Laylee was initially pitched as a great Rare platformer and I have say, directly from the opening video to the primary menu screen, it for all intents and purposes overflows the appeal and character of an exemplary Rare game. The primary menu and spare screen brings back nostalgic recollections of playing Banjo Kazooie on the Nintendo 64. Try not to expect a solid spotlight on story as the game is a platformer as a matter of first importance, so while there is a fundamental story spread out in the opening cutscene, the real game doesn’t generally have a lot to offer. 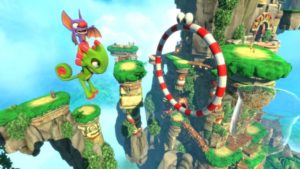 The game has a fairly simple story premise. You have to collect all the pages from various magical books that were taken from you by the main villain, who goes by the nickname of Capital B. His design seems to be inspired from Guru in Despicable Me and he even has a sidekick, a robotic duck who goes by the name of Dr. Quack. These are all standard villain material in a old-school platformer although the quality of their character designs are up in the air along with other side cast of characters in the game. They aim to take all of the world’s literature and turn it into a business so it is up to Yooka and Laylee to stop their nefarious plans.

When Playtonic said that they wanted to go back to the roots of the old school platformers, they meant it literally because the game is pretty much designed around the limitations of the classic Rare platformers. There is no map available in the game and you will have to rely on your own skills and visual memory in order to progress around the world map or locate and discover the secrets. These secrets are mostly collectibles in the form of Quills, Pages or other objects. Each world in Yooka-Laylee has around 200 Quills so if you are a fan of collecting objects in a platformer, you might enjoy digging out all of them.

The two titular characters in the game are Yooka, the Chameleon, and Laylee, the Bat. These two have been inspired by the design of Banjo and Kazooie although they sadly don’t come anywhere close to their personality. While I have to give Polytonic props for creating these original characters, they also needed to put some thought in the designs of some of the side characters which often look out of place in the game’s colorful open world. One of the important character, Trowzer – who is a Snake salesman that gives the player some key abilities in each of the game’s world – is an example of such terrible character design. Playtonic has decided to go for an art style that seems to invoke memories from 90s era but it doesn’t fit in with the game’s modern environments.

Graphically, Yooka-Laylee looks really gorgeous and runs at native 1080p on the PS4. Unfortunately, at the time of writing this review, there was no official support for the PS4 Pro. There are a variety of different worlds to play around in Yooka-Laylee and while some of them might not be as visually stunning as others, they don’t look nowhere bad enough to make them stand out. The thing that surprised me more was that the performance of the game was really stable. Unlike some of the pre-release reviews, my experience with the game was without any major frame rate issues. This was surprising to see since Yooka-Laylee was developed on the Unity Game Engine, which has proven to be a troublesome engine on consoles when it comes to performance. 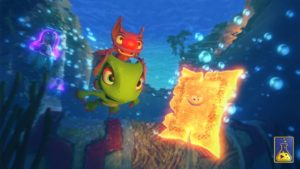 The main fun in Yooka-Laylee comes from exploration and discovering the hidden secrets around the world map. There is a main hub in the game which makes it similar in design to the multiple worlds of Banjo Tooie instead of something like Banjo Kazooie. Depending on your likeness to either game, you will either love or hate Yooka-Laylee. Each world has to be unlocked by collecting a specific number of pages, called ‘Pagies’ in the game. They can also be used to expand a world. These are scattered around each of the game’s world and some of are hidden in carefully crafted platforming sections. This might frustrate some of the fans because the game lacks checkpoints in the middle of the level, so if you fail a long section of platforming, you will be forced to start it again from scratch.