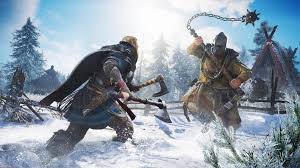 Understandably, fans are rather upset about what appear to be a bait-and-switch. At the time of writing, the trailer sits at 1.8K Likes and 4.1K Dislikes on YouTube — a clear indication that fans aren’t happy about how clothes turned out.

The /r/xbox subreddit was equally anxious about the cinematic trailer we saying today.

“WAIT UP. Where was the Valhalla gameplay??????” exclaimed one comment. “How the hell is that guy and the director saying that was gameplay. That was it?!”

“AC Valhalla ‘gameplay[,]’” another comment began. “[Do] they not know what gameplay means? We saw a 3 minute long cinematic. Not a single second of gameplay despite different people talking about gameplay showcase.”

And lest we not recall, the /r/AssassinsCreed subreddit seemed mainly disappointed with the trailer.“My hype is still on top, but we were [misled] on the gameplay part of the announcement…” yet another let down Redditor said in a comment. “I’m gonna go watch [The Last Kingdom] for a while … I loved the [Vampire: The Masquerade Bloodlines 2] trailer[,] though[.]”

As Assassin’s Creed has been a long-running franchise, some people are naturally comparing today’s trailer to a reveal of an earlier game. Assassin’s Creed Origins, for example, instead debuted with a 5-minute trailer that actually included in-engine gameplay.