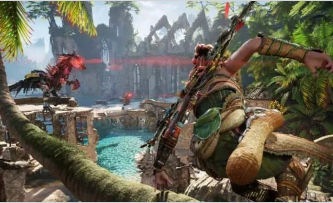 Horizon Forbidden West was one of many large titles mentioned in September’s GeForceNOW leak. This is not surprising considering Horizon Zero Dawn, the predecessor of Horizon Forbidden West, has been available on Steam since August 2020. Sony has made it clear that they don’t want to force simultaneous releases of first-party titles across both platforms. When, if ever, will the second installment of the series be available for PC?

Horizon Forbidden West will transport Aloy to Forbidden West. Playstation describes this area as “a dangerous frontier concealing mysterious new threats.” We know of many new game-changing features, as we can see in the gameplay trailer shown in Playstation’s State of Play broadcast in May. Forbidden West has added swimming, free climbing, and new melee combat aspects. The next game will offer something for even the most ardent Zero Dawn fan. The Forbidden West landscape is a paradise with clear waters and palm trees, which will be a bonus. It’s no wonder that fans of Aloy’s previous adventures can’t wait for this adventure.

Horizon Forbidden West had a delayed release before and was not released to PS4 or PS5 until February 18, 2022. We could be mistaken to believe that Forbidden West will be available on both Playstation 4 and 5 consoles simultaneously, as there are still a few months before the release date. We’ll probably have to wait a bit longer to see it on PC, as Sony will likely want to concentrate their efforts on making sure the game is of the highest quality for a console release. We only hope the wait doesn’t last as long as the original Zero Dawn, which will be available on PC almost three years after its console counterpart. We can be certain that Sony will not keep us waiting as Aloy’s popularity has been established since then.