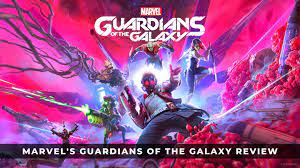 Marvel’s Avenges was launched with the principal criticism being the “game-in-progress” concept. Gamers were not offered a complete title at launch. Instead, they were given a title that would gradually develop over time. Square Enix left many players feeling let down by the lack of microtransactions, as well as a single-player campaign. The reception to Marvel’s Guardians of the Galaxy was very poor this year at E3. The collective feeling was that this game would be just another one, and nothing special. Perhaps having low expectations is the key for happiness. Guardians of the Galaxy was far better than we had expected.

STORY: PETER QUILL and THE GUARDIANS

The story is about the Guardians trying to make a name for theirself. Peter Quill is the leader of the team, as they attempt to earn a lot more credits and get the target off their backs. Everyone will have a great time with their funny jokes and sequences. The most interesting aspect of the story is the exploration and sharing of grief. Although they may joke around a lot, Guardians are made up of people who have been through terrible times and are now bonded together. This is what we see, and it tugs at our heartstrings to see their tragic backstory. Their history is brought up by the main villain, adding depth to their characters.

Star-Lord was a major focus in the beginning. This is what people were unhappy about. You can’t play as all Guardians as you have to be Peter Quill. Developers deserve credit for making a character few people would like into a great leading. Although he’s proud and cocky, it doesn’t make him dislikeable. You feel like Peter is the leader and not the team.

Quill’s eyes show the character depth and reveal of other members. We learn about the team’s history and their past through Quill’s conversations. This character structure works within the frame because the gameplay allows you to only play Star-Lord. The Guardians are great fun, for all their merits. The squad shines bright, from the way they get along to their constant bickering. The MCU fans will feel the same, but the character makes the game feel unique.

As you solve puzzles and eliminate enemies, Star-Lord is viewed from a third-person viewpoint. Star-Lord’s game visor gets a lot of use. It isn’t as prominently featured in the movies, because it would be difficult to hide Chris Pratt. The visor is a detective mode that identifies key pieces you can interact with. The finickiness of scanning objects with your mask is a little annoying. Peter can ask his team to help him once you’ve finished scanning and the interactive has been activated.

This makes combat more tactical. While Peter is still under the control of the player, he can use his fists and guns to fight enemies. However, he also gets to display his leadership skills. As the Guardians unleash their special attacks, you give them orders. Groot is responsible for crowd control, Rocket handles explosives, Drax strangles enemies and Gamora does a lot of slashing. The combat can become repetitive after a few chapters. It’s easy to get used to the strategy and there isn’t much variety. You just have to go with the emotion in battle, regardless of any additional skills you may purchase.

A kicking soundtrack has been an integral part of the IP’s identity since the first Guardians of the Galaxy film. Square Enix felt that the game needed lots of music to enhance the experience. They decided to abandon the classic 70s rock songs and use a majority of synth-pop 80s songs as their base. They aren’t there for any other reason than Peter’s infinity for his Earth-life. The music is occasionally heard during battle but doesn’t last very long. It will last for a maximum of one minute and then it stops once you win.

The best thing about this score is Richard Jacques’s amazing work. It is a space epic that delivers an amazing adrenaline rush. He is also able to capture the emotion that goes along with the scenes about grief. The Star-Lord Band was another impressive creation by the developers. The Star-Lord Band is a fictional band that Peter admires and draws a lot from. This is not just one song. It has an entire album of original songs. Star-Lord Band has a great sound that evokes Iron Maiden, Black Sabbath and other similar bands. Steve Szczepkowski deserves a special mention for creating an in-game masterpiece.

The music is in the same style as the epic rock album covers. You’ll be amazed at the vast landscapes and giant Celestial heads that are in the background. The screen is filled with vivid neon colors, including purple and vibrant gold, which are combined with the stark color palette. The designers did a fantastic job. It’s unfortunate that we don’t get to explore these lands. Square Enix’s facial animations are another admirable feat. They’re so precise. It’s amazing how subtle the faces are when they twitch with pain or irritation is.