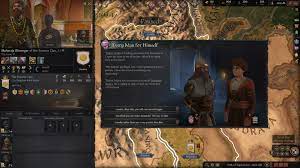 Crusader Kings or CK3 is a strategy game from Paradox Interactive. It does things differently. There is no win condition in the game. You won’t see the screen saying that you have conquered the world. Instead, your goal is to build a dynasty, and keep it going as long as possible. This can be frustrating for new players so I thought I would share some ways to have more fun.

CK3 is a strategy game that you want to win. This is the easiest way to grow your country, which will in turn give you more money, soldiers, and more problems. This strategy is what newer players will choose first, and it’s simple.

CONQUER AS MUCH AS YOU CAN, WHILE YOUR CHARACTER REMAINES ALIVE

It can be more difficult than you think depending on the role you play or the character you create. CK3 provides a lot of information but it is not always clear what will determine the outcome of a campaign. No matter if you’re building or maintaining a kingdom, expansion can be both entertaining and strategically sound.

MAKE SURE THAT YOUR PLAYER HEIR LEARNS INTRIGUE OU DIPLOMACY

PLAY UNTIL THE FIRST CHARACTER DIES

You’ll be able to notice some things. First, your kingdom that you have expanded or built has likely been divided between your vassals. You are likely in line for at least one title. This is where the Game of Thrones-esque politics war begins. You can use your skills in diplomacy and intrigue to forge alliances and work with your family to spread your nation’s reach. Or you can assassinate their children and their offspring to take what is truly yours.

This way of playing the political system is more engaging and gives you a lot more control. It’s hard to be more upset than when your son loses half the kingdom you have built. And it’s even harder to feel smarter when a complex political plan is put together. You get the best of both.

Although this strategy is more abstract, it can yield some interesting results. You can create your own ruler by clicking the option at the bottom left of the screen when you open a new game Crusader Kings. You can create a character and give them any traits you want. You can also set their religion, sexuality, name, and most importantly, their age. It is possible to create a character as if they were a child. Although you cannot decide their education at a young age you can make decisions about their appearance and start to give them traits.

Playing as a child has its drawbacks. Some things, such as the sway action are not available to you until a certain age. The real fun is in the process of naturally acquiring traits as you get older. There are many randomised events that will determine the traits your character receives as they age. Although you won’t be as powerful as a player-made adult character, it will add a challenge and excitement to your game. Rivalries and friendships can also form early in life, which gives you immediate political options when you reach adulthood.

Don’t worry perfectionists! You don’t have to be randomized in everything you did during your childhood. You can still choose the lifestyle your child will live as they grow up, and you can give them traits through the creation menu. Mentorship is also a key role. You can choose to be a mentor or instill some of your character’s traits. This route can be slower, but it helps you to get attached to your character. It also adds a sense of discovery. As a child you can still fight in wars, get married to political women and make decisions about your country.

If you’re looking for a longer time with your first character than usual, why not make them a child?

Although it is the least clear, the final solution can be one of the most enjoyable. Roleplay is simply that. This is not a competition you must win. Instead, see it as a story that’s evolving. Decide what type of person you want your ruler to be from the moment they are chosen. How did they acquire the brave trait? What is their master plan if they are a clever schemer rather than a brave warrior? What do they think about their religion? Would they change it once they have enough piety?