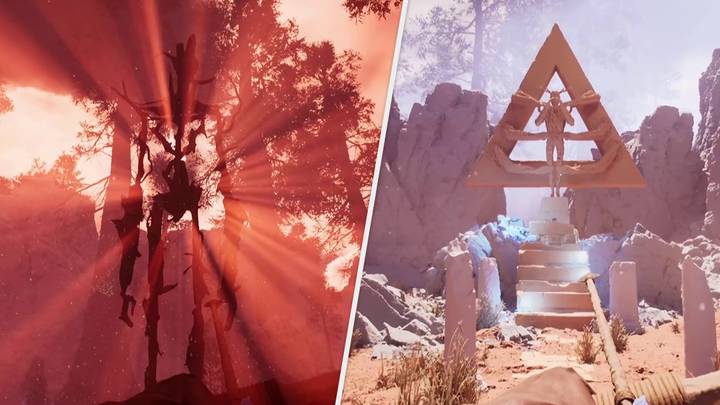 The Axis Unseen is a new game that mixes horror, heavy metal and hunting.

The Axis Unseen is a new game that mixes horror, heavy metal, and hunting.

Did you know that very few heavy metal hunting games are set within hauntingly beautiful fantasy forests? Fear not, friend! The Axis Unseen has been developed in Unreal Engine and checks every box.

Nate Purkeypile, a former Bethesda Softworks designer, was the world artist for Fallout 3, Fallout 4, and Fallout 76. He also has credits on Starfield and Skyrim, and Metroid Prime 3 (among others). His new project, Just Purkey Games, has announced The Axis Unseen. It defies categorization. The strange world’s visuals are striking, with stark colors and lines of wood and exposed sandstone, as well as light flecks that follow in the air.

The hunter is looking for creatures that look like they have been hand-carved by a woodworker but bleed when hit by an arrow from the hunter. The character tracks the blood trails and dirt prints and shoots the deer-like creature. It then falls to the ground and is broken into small light pieces.

Taiga is responsible for the epic arrangement accompanied by the hunter’s journey throughout the trailer. Overshia provided the 2D artwork. Each day, the player will likely leave their base to hunt the animals for food or protection. Upgrades are possible for the rudimentary bow or arrow, and the character can constantly check how many arrows they have left to hunt down or attack. However, arrows can be found in ruins. I bet players will be tempted not to go deeper and risk meeting a wild beast.

The game is currently being developed in Unreal Engine 5 PC. However, The Axis Unseen could still be made available for consoles if enough people are interested. It’s piqued our curiosity.

The Axis Unseen is a new game that mixes horror, heavy metal and hunting.