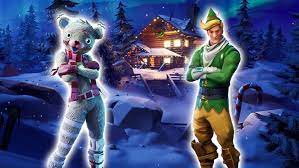 Fortnite Chapter 3 Season 1 is now live. Fans will see a lot of the new Island covered with snow and other holiday decorations. The Frosty Frenzy is here, and it should last through December, with tons of holiday-themed skins and weapons, events, and challenges.

Tomorrow’s update will include files for Winterfest. It is expected that it will be the 19.01 hotfix. However, there is still a possibility that it could be Fortnite 19.10. Data miners discovered that Christmas Trees are a major part of Winterfest and have already determined where the most Christmas Trees will appear on the map. Apparently, IO Outposts and Guards also play a part.

The Winterfest tags have been leaked. It is interesting to note that they are listed under Athena (the island from Chapter 1).

Although Winterfest 2021 details have been quiet, Fortnitemares has concluded so there should be plenty more information soon. Data miners have already begun to uncover the first clues to the event, including new Fortnite strings by Epic. These strings include: