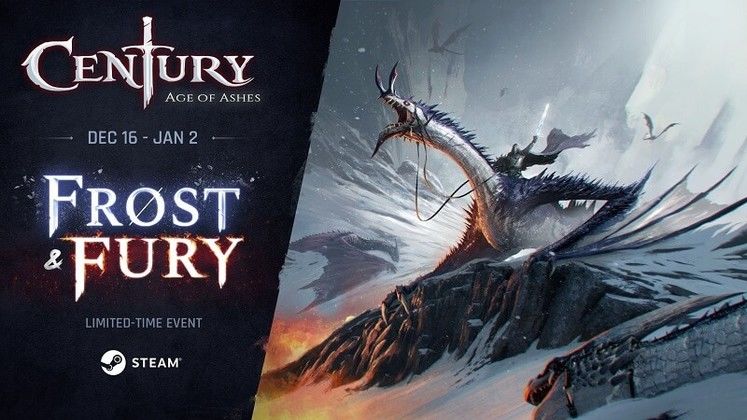 Playing, the publisher and developer of Century. Age of Ashes’ Frost & Fury has announced the end and start dates. This event brings three new rideable dragons and a limited-time Chaos game mode to the free action game.

Frost & Fury, Century: Age of Ashes first limited-time event since its December launch, is Frost & Fury. More than 500,000 players took to to the skies during its first week. For more information about the event’s end and start dates, new mode and rewards, please read on.

Century: Age of Ashes has set its Frost & Fury event’s start date at December 16, 2021. The event’s end date is set for January 2, 2022. The players have just over two weeks to prove their skills and unlock new cosmetics.

The Chaos free for all mode pits eight players against one another, and requires them to take down as many opponents in as little time as possible. Every takedown increases your Bounty stacks making you a more valuable target.

You can stay alive by maxing your Bounty stacks and consuming it. This will give you the ability to eat it, which negates your opponents’ bonus points.

The Chaos game mode is played on a frozen Sarghildian Creek map. It modifies the Salvation Surge ability so that dragons receive a speed boost for a brief duration. The rider receives a shield buff at the end to increase their protection.

Complete all the challenges in Century: Age of Ashes’ Frost & Fury event and you will be awarded the Strandwarden Ensemble or Faraway Floes dragon.

During the live event, you can also purchase these three dragons:

Century: Age of Ashes can be played for free on your PC.