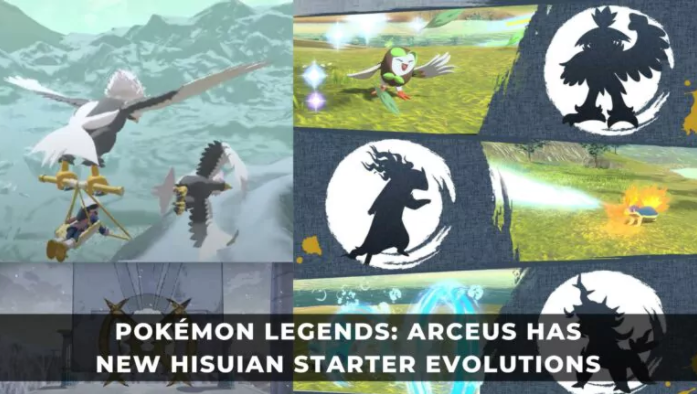 Pokémon enthusiasts will be able to take off the shrink wrap from the most recent major instalment of their favourite franchise in a matter of days. Pokémon: Legends Arceus will be released on January 28th. The final trailer has just hit YouTube and revealed some exciting news. Pokemon Legends Arceus now has new Hisuian starter mutations.

It is important to note that the evolutions for Quilava, Dartrix and Dewott are different from those featured in previous games. It is not clear if their names will remain the same. They could be new forms or Decidueye, Typhlosion and Samurott versions of Typhlosion and Decidueye. This is similar to the Alolan and Galarian Meowth variants. Will they be entirely new evolutions, similar to how Game Freak added Sylveon in Gen 6 to Eevee’s evolution tree?

Because the silhouettes shown don’t look very different to the classic versions of Typhlosion and Decidueye, the former seems more probable. Some trailers featured both Hisuian variations and new evolutions classic Pokemon such as Wyrdeer and Hisuian Growlithe.

This announcement comes just days before the game’s release. The Pokemon Company is using this announcement to create hype for the game. It was brilliant to show only silhouettes. Fans will now eagerly play until Quilava, Dartrix, and Dewott become their new Pokemon Legends.

Are you looking forward to the new Pokemon game? Comment below!