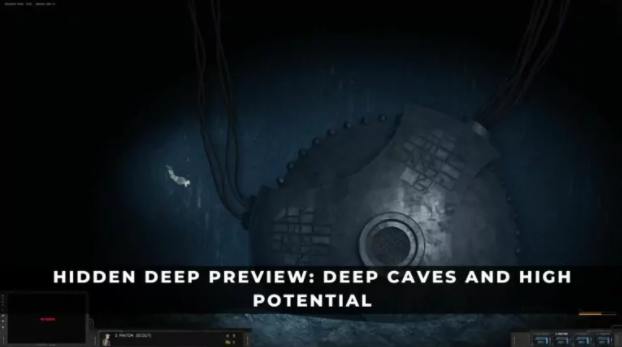 There are 10 levels available, as well as several challenge modes. Hidden Deep early access is now public. It’s a solid release, with great mechanics and a satisfyingly intense setting. We have about 6 to 7 hours of gameplay and a pretty good idea of what we can expect from the game.

Lukasz Kaluski, Cogwheel Software and the sole developer behind this project, said that it was “the largest project of my life in which I put all of my heart and sweat”. It shows.

This is also evident in his horror influences from the 80s and 90s, such as “The Thing” and “Alien”. Are the limitations of this game too significant for it to reach its full potential? Will it join the ranks of small-team games like Braid?

TABLE OF CONTENTS1 The Story – A Suboceanic Mystery1.1 How did you keep it dark?2) The Gameplay: Shooting and Spelunking2.1 The Monsters That Dwell Below2.2) What aspects need tightening up3) Graphics, Audio – The Sounds and Sights

THE STORY — A SUBOCEANIC MYSTERY

Although the story is interesting, it is not available in Hidden Deep early accessibility. You are a member of a rescue team heading to the bottom of the ocean. They were looking for mysterious anomalies, and they also collected a blue mineral used for unknown purposes.

The facility is a mile below the ocean floor, and you will need to deal with monsters as well as technical issues.

It’s a classic but powerful starting point for the story. The game promises an “immersive dark science-fiction story”, which pays homage to the 80s and 90s films and games. The story is, however, essentially window dressing from what I have seen—many monsters in the facility and even a few dead bodies scattered about.

You can also find some environmental storytelling. This is only applicable to your primary mission. You get very little information or plot details.

Terminals and the telling of an environmental story are two main ways exposition happens.

Is it INTENTIONALLY KEEP IN THE DARK?

You don’t have to be kept in the dark despite all this. Hidden Deep has an oppressive feeling. The preview shows you as many workers being sent to their death. Your boss will tell you what you need, which is appropriate.

It ends with a death count, which I find makes you feel less important and expendable. This feeling of horror/thrillers from Eastern Europe can often be quite effective and powerful when done right.

Is it enough to fill this space with blank characters and minimal exposition? No. To draw gamers, too, there must be more mystery. Although I hope that the story is hidden deep within the game, it lacks. After playing the game for 7 hours, I hope to see where it is heading story-wise after 10 levels.

THE GAMEPLAY: SHOOTING and SPELUNKING

The Hidden Deep early-access shines in the gameplay. It is what keeps the game together, despite its limitations. It’s a 2D action/exploration-platformer. Engineers and Scouts can control and operate machinery, while scouts can use a grappling hook for exploration. Sometimes you may need to switch between several characters.

You can explore the mines, fight monsters and solve puzzles through them. You will receive 20, 7, or 1 extra life, depending on how complex the task is. Due to the hostile tunnels spelunking catastrophes I was exposed to, these different lives were necessary.

Hidden Deep’s Early Access is where you will spend most of your time looking at the large maps. Tunnel boring machines and explosives can connect paths and open up new areas. You can abseil into danger as if you were in Rainbow Six or swing through caverns like a subterranean Spiderman.

The game feels less linear due to the verticality and gameplay of the map. Although the maps aren’t always as difficult or complex as they seem at first glance, there are many paths that you can take to get it right.

The gameplay is addictive. The grappling hook was the key to making it a fun game. It is your best friend and will help you reach places ladders often go unnoticed. You can feel satisfied as you fill out your map with monsters.

There are tools to assist you in your journey. If you don’t know where to go, a small drone can help you map the area. A scanner can show you underground tunnels that you can blast into.

MONSTERS THAT DWELL BELOW

Some of the AI features that make these monsters enjoyable include the fact that they will sprint faster towards you when you are spotted, which can give you a little bit of terror. They also have a last-ditch jump that can make it possible to leap.

If you don’t want to be taken into the ceiling, the ceiling monster is a beautiful addition. It’s almost like being in King Kong’s bug scene.

Hidden Deep’s gameplay is in keeping with the game’s overall feel. It’s great to feel isolated and anxious as you make your way through the tunnels.

Some of the physics are not correct. For example, the crane cables that transport vehicles can be too loose. This could cause your character or machines to launch or drop frustratingly many times. This can cause you to have to start a level again and again. Other minor problems include not being able to climb knee-high walls. You can sometimes jump them, but it is strange not to vault them.

Another problem is the inability to give multiple characters that you control. You can only tell them to run until they stop running. Your squad will be moving back and forth across the map. Both a defence mode and a follow option are required. You are most likely to see a character die right now because he is standing there being slowly eaten.

GRAPHICS AND AUDIO: THE SIGHTS and SOUNDS

There are highs and lows in the game’s graphics and audio. For a 2D game, the character and monster models have great detail.

According to the website, they used motion capture for a base. Tunnels and mine shafts are well-designed and have a sense of direction. There are some fantastic pieces of artwork in the background.

These are rare and far betwe. You will spend most of your time in tunnels that look great but are almost identical. This is a shame. The backgrounds I’ve seen in the preview add a lot of world-building and design.

I hope that the entire game features more backgrounds like these.

The audio is also mixed with good and bad elements. The music is very uninspiring. It was the same low, droning music except for one level. It’s not terrible, but it’s not great. It doesn’t affect the experience in any way, but it could improve tension.

The sound design is excellent. The sound design of all equipment and background sounds is realistic and well-made. Animals fly out of the tunnels and crawl towards you due to your gun’s loud bang. Like the sound of spiders moving about, the little things add tension because you don’t know where they are coming from. This works well with the map design and gameplay to create a feeling of danger and isolation around every corner. To get the best experience, it’s worth using headphones