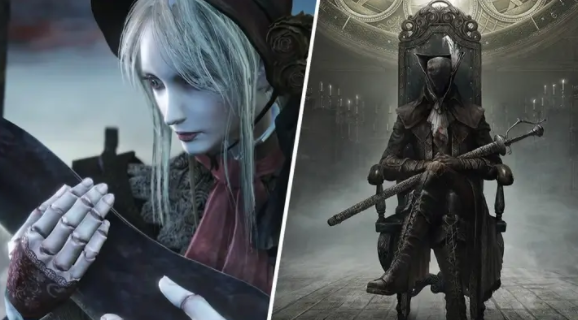 The Hunter Must Hunt: Why I Can’t Stop ‘Bloodborne ‘

The Hunter Must Hunt: Why I Can’t Stop ‘Bloodborne’

Last year, I wrote Giving up on Bloodborne. Although I enjoyed the game immensely, it was not for me. That’s at least what I thought…

However, “a hunter must hunt”, according to the saying. Bloodborne was not something I could get out of my head. My subconsciousness was anchored to the gothic city Yharnam. I could hear the Doll’s voice in my grey matter and knew that I couldn’t ignore it. I decided to reinstall FromSoftware and search for the Eldritch Truth.

Did you know that Bloodborne was remade as a PS1 title? You can see the video here.

If you’re not familiar with Bloodborne, it’s a PlayStation-exclusive, action role-playing game from 2015. Your character arrives at Yharnam to seek Paleblood, a miracle cure. The game starts with your protagonist receiving a blood transfusion.

The story of the FromSoftware is not told directly because it’s a FromSoftware video game. It’s up to you to put together the story from item descriptions and sparingly used character dialogue. However, it is evident that the situation in Yharnam, with death – or worse – waiting, is very grim.

When I opened the game for the first time in a while, my character was waiting in the Hunter’s Dream. This location is your base and appears to exist on an entirely different plane than the rest of Bloodborne’s world. Gehrman, who is the First Hunter, will be found here. He seems to have recruited you for his mission to hunt beasts. You’ll also find the Doll here, a living mannequin that serves as your NPC for leveling up.

The Doll uttered the words, “Welcome back, good hunter.” The Doll asked me, “What is it you want?” I knew that I wouldn’t be free from this game until I beat the damn thing. Because I needed information to understand what was happening here, I learned how I could see the hidden secrets within Yharnam. What is the point of being attacked by hunters when I support their mission? These terrible beasts are how did they get here? Why are the pigs so large?!

As I ran through the world of Bloodborne, hours felt like minutes. The path ahead was filled with demented hunters, vicious werewolves, and many imposing bosses, each step becoming more deadly than the previous. Things took a dramatic turn when Cthulu-esque figures began to grab at me.

Each step was more difficult. Every step brought new dangers, and each victory brought more difficulties. I found my passion for learning more in the frightening world of Bloodborne and was happy with it.

I eventually beat the game and unlocked the Childhood’s Beginning ending, which some consider the definitive conclusion. Although I knew I had not done all of Bloodborne’s tasks, I couldn’t resist the urge to finish the game. This was the end that left me feeling empty.

After the credits had rolled, the opening scene was shown to me. The same intro video was shown to me at the beginning of my playthrough. I was then free to roam the apocalyptic streets in Yharnam.

It was difficult to accept this lack of resolution. Although I didn’t expect it, I was determined to get more than I received. I’m not fooled. I accept the fact that my disappointment is my fault.

I realized that I would never get the required Bloodborne, so I stopped playing. FromSoftware doesn’t tell simple stories, which is fine as it’s about the journey. However, the road seems endless when it comes down to this game. I decided to let Bloodborne go and start a new game to save my time.

It was more than a month ago, and I haven’t touched Bloodborne in over a year. Yet, it still calls to me. It still calls to me in my back, singing its siren song. It’s enough to make any man sick, as Father Gascoigne, the game’s boss, would say.

I don’t know what to do, other than to want the feeling to end, but I still want to play the game. Maybe forever. Although I would like to move on from Hunter’s Dream, I keep returning to it in my head. This delirium gives new meaning to the Doll’s repeated phrase: “Farewell good hunter.” May you find your worth in this waking world.

Advertisement
The Hunter Must Hunt: Why I Can’t Stop ‘Bloodborne ‘