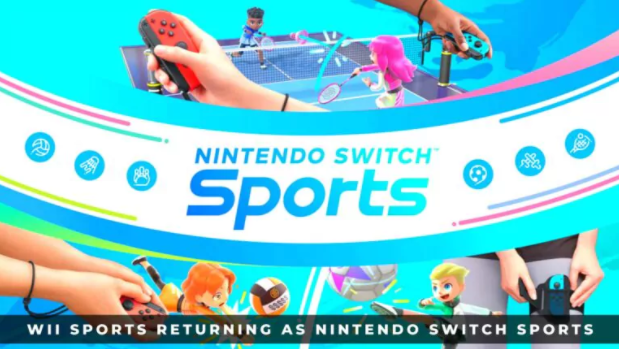 Wii Sports is a Nintendo Wii game that you are likely to be familiar with, regardless of whether you own one or not. It was the launch title for the new Wii and the most popular Wii game ever, selling over 82,000,000 copies worldwide. The decision by Nintendo to bring back the game for the Nintendo Switch is no surprise. Wii Sports was recently re-evaluated and will be available on the Switch as Nintendo Switch Sports. It will be released on April 29, 2022.

Nintendo Switch Sports features 6 sports, 3 of which are returning from Wii Sports and 3 new. Three returning games include tennis, bowling and chambara (swordplay). Swordplay was featured in Wii Sports Resort. This sequel to Wii Sports was hugely popular. These three new sports include volleyball, badminton and soccer. In a free update, golf, which is another sport in Wii Sports will be available in the fall to Nintendo Switch Sports. The game is compatible with TV and tabletop modes, but not handheld mode.

Nintendo Switch Sports allows multiplayer. With local play, you can play with up 4 friends and family members on one Switch console. Or you can play online with other players. You’ll earn points as you play against other players in random matchmaking online. These points can be used to redeem for rewards. These points can be used to purchase new clothes and accessories for your avatar, which you can customize in-game. In each sport, you can also reach the Pro League.

Nintendo Switch Sports can be pre-order to get your region pricing. The Leg Strap accessory is included with the physical version. This accessory can be used in soccer. The digital version is also available, but it’s less expensive and doesn’t come with the Leg Strap. You can buy this separately.

Register for the Nintendo Switch Sports online test. It will be held at the designated times between February 18th to 20th. There will be random online matches for tennis and bowling. The online play tests will open on February 15th at 5pm PST. Register if you are a Nintendo Switch Online member, which includes trial memberships.