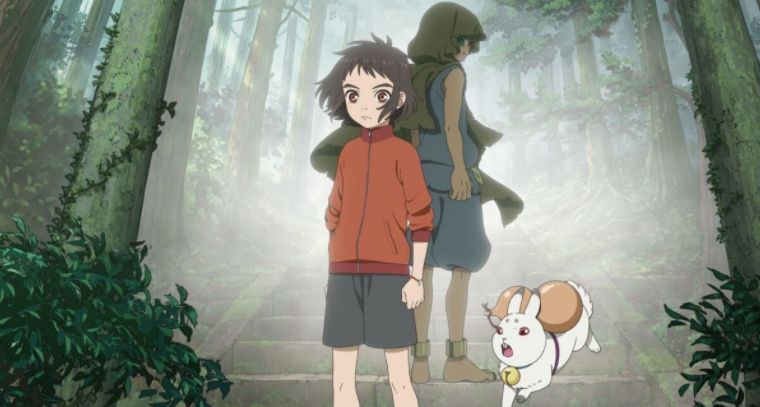 Child of Kamari Month, powerful meditation on loss and legacy, is another impressive entry in the Netflix Original anime movie collection. Takana Shirai directs the Japanese animated fantasy story. It is animated by LidenFilms and filters them through the supernatural.

Kanna, a sixth-grader who lost her mother in the first grade, struggles to find joy in everyday life. Young Kanna runs after her smiling mother in a beautiful opening sequence punctuated with soft music. They run across an open space that transforms into endless white spaces. As Kanna’s mother begins to fade away, the younger Kanna cannot keep up. This scene foreshadows the future, as Kanna’s past holds hidden secrets.

After several more scenes, the real story begins. The audience gradually pieces together the grief, and trauma Kanna has experienced due to her mother’s death. Kanna competes in school marathons because her mother was a great runner. She is content to talk to rabbits alone about her internalized feelings, which she can’t express to her best friend and loving father.

After a few moments that clearly show Kanna’s pain and panic at losing her family, the film introduces a shocking revelation: Kanna discovers she is an Idaten, a descendant of the gods. Kanna must assume the responsibilities and mantle of her mother, Yayoi.

Her mentor enters the rabbit Kanna has previously confided in. The creator of the rabbit was able to create a cute version of this already adorable creature. The white rabbit serves as Kanna’s information and guide. It’s easy to see how this character is reminiscent of Alice in Wonderland’s white rabbit. But you wouldn’t want to cuddle this bunny. The rabbit tells Kanna that she must collect food offerings of various deities in order to deliver them in time for Izumo’s great gathering.

Animation films that incorporate fantasy into their stories embrace the supernatural openly. The power of her mother’s bracelet slows time to the point that raindrops seem almost frozen in midair, and people look like stone statues. This fantasy trope, Child of Kamari Month, captures the essence and beauty of time. The animators almost stop the clock by allowing the richly painted backgrounds to stand still while highlighting the fluidity of Kanna’s movement as she runs through Japan’s streets.

The Child of Kamari month is stunning to look at, with beautiful linework in the character designs and animal deities colors. This film shows how slowing down can help us appreciate the beauty of life.

At any given moment, Studio-Ghibli-esque tracks or a piano based on strings are expected to play. Contrary to popular belief, the scenes are controlled by horror-adjacent music, booming drum beat tracks, and even a Lain-influenced song. This film is a captivating experience, thanks to thoughtful choices from the soundtrack to the animation.

It’s cliché, but the old saying “It’s not a sprint, it’s a marathon” is still valid. Despite Kanna’s need to run fast in a given time, she discovers some truths about herself. The film explores Kanna’s grief and establishes relationships between the characters. It also leisurely wanders through still shots of the painted backgrounds.

The Child of Kamari Month teaches us to contemplate and reflect when we stop running from our grief.