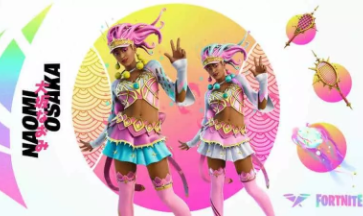 Naomi Osaka is not only one of the most successful tennis players in the world, but she also stunned the world by pulling out of the French Open 2021 to concentrate on her mental health. Despite the growing awareness and importance of mental health, it is often overlooked. Osaka’s 2021 decision helped bring mental health back to the forefront of peoples’ minds. This is just one of many inspiring actions by the tennis legend, which also includes her active support for the Black Lives Matter movement.

Epic Games collaborated with Naomi Osaka in order to celebrate her stardom, her culture, activism, and achievements. They created two new Icon Series skins that reflect her mixed Japanese-Haitian heritage.

The Naomi Osaka skin is the first, and it’s a tribute to Osaka’s Japanese heritage. The pastel outfit gives Naomi Osaka’s look luscious pink locks and reimagines her tennis kit in stunning pink and turquoise. The Royale Racket Pickaxe, which comes with the skin, leaves a pink trail after every swing and can also be worn as a Back Bling. The Queen’s Cloudcarriage Glider is a fashionable way to get into the air. Court Island. You can also get the Naomi Osaka Outfit in a Court Queen color option.

Osaka’s Haitian heritage inspired the Dark Priestess Outfit set. The Outfit comes in two colors, Osaka’s brunette hair being replaced with multi-colored tresses in a Neon Priestess alternative style. The Portalforger Paddle Pickaxe is also included with the Outfit and can be used as a Back Bling. The Portalforger Paddle, like the Royale Racket Pickaxe, leaves behind a green trail after every swing. Also, the Glider has been reimagined with the Priestess set. The Cursed Hazeboard Glider now features green hues.

What time will the Fortnite skins by Naomi Osaka be available?

The Outfits Naomi Osaka and Dark Priestess Naomi will both be available in Fortnite’s In-Game Item Shop starting March 3, 2022. The items will be launched at the normal global reset time.

A brand new Solos cup will be held before the Outfits launch, giving players the chance to win the skins for free. Take on a new challenge by participating in the Naomi Osaka Cup on March 2, 2022. If you place high enough, you can earn the Naomi Osaka or Dark Priestess Naomi Outfits and the Royale Racket Pickaxe, Back Bling, and the Portalforger Paddle Pickaxe, as well as the Portalforger Paddle Pickaxe, and Back Bling. The Forbidden Ace Spray will be available to anyone who earns eight points in this cup.

You can see Naomi playing Fortnite and her beautiful skins!

Naomi Osaka will play Fortnite with breezy to celebrate the original spirit skins’ release and provide a glimpse of what they will look like in-game on Twitch, March 1, 2022, at 4 pm PS/7 pm EDT/12am GMT.