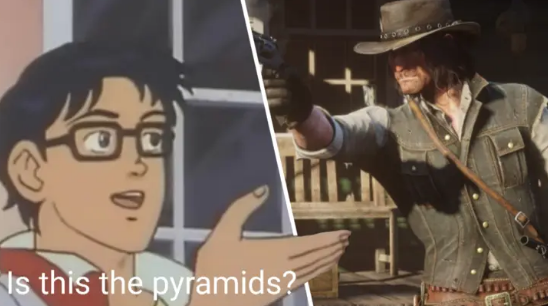 Gamer Believes “RDR2” Is Similar To The Pyramids. Commenters Discredit His View

Gamer Believes “RDR2” Is Similar To The Pyramids. Commenters Discredit His View

Red Dead Redemption II is one the most technically outstanding games ever made. We were able to see another world until February 2022, when FromSoftware released its Elden Ring.

It is clear that Rockstar was able to create the massive Western. It’s easy to see why RDR2 is often ranked among the greatest games. This is an incredible achievement by the developers, and it was one of the most ambitious gaming projects the world has ever seen.

We can appreciate RDR2‘s achievements, but we also have some perspective on how it fits into the larger scheme of things. One Resetera lad didn’t show the same restraint.

Their post, titled “Am i crazy for thinking Redemption 2is one of the most impressive large scale projects ever created humankind?” states that a cowboy fanboy believes RDR2 may be more impressive than the construction of the pyramids. They wrote:

“So, this thought has been percolating since I first played RDR2 in 2018. This is truly one of the most unique large-scale projects humans have ever made. It is comparable to the Great Wall, pyramids, Hoover Dam, or another large-scale project. It is fantastic to see the virtual world and how it is simulated.

They were rebuffed in polite and surprising ways by the comments. One user commented, “I wouldn’t put it that way, but it’s the most impressive videogame I’ve ever seen.” Another joked that “The moon landing may be a close second.”

This is the response:

The Great Pyramid of Giza was built around 2600 BC. It still stands today. We are 4600+ years away from creating that single feat of engineering, and it’s still as fantastic today as it was back then. Anyone in 100 years will forget red Dead Redemption II. It won’t be a popular tourist attraction. People won’t travel to see it and marvel at the achievements of primitive tools. This is serious.

It’s much cheaper to take Arthur to the Old Midwest than to visit Giza, so that’s a nice perk.

Advertisement
Gamer Believes “RDR2” Is Similar To The Pyramids. Commenters Discredit His View