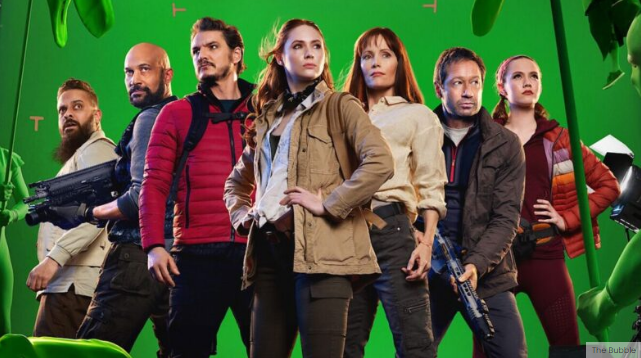 The Bubble REVIEW – Pops Into Nothingness

The Bubble REVIEW – Pops Into Nothingness

The Bubble by Judd Apatow aims to recreate the experience of filming a movie during a pandemic. Although the concept intrigued me, and the cast seemed promising, I realized how wrong I thought that this film might be good.

The Bubble begins with Carol Cobb (Karen Gillian), an actress who her agent approaches to star in Cliff Beasts 6. Carol’s last movie Jerusalem Rising was a failure, so it might be worth going back to Cliff Beasts. Carol is leaving Josh (Chris Witaske), her clingy boyfriend, and their two children behind and travels to England to film the film. The actors must quarantine for two weeks to keep them free from covers. This is common when travelling during the pandemic.

This is all done hyperbolically, intended to poke fun at actors. While I believe art is important and makes life worthwhile, The Bubble doesn’t do that. It’s funny, scattershot, and loses its plot.

A comedy sketch can have one character trait. That’s enough to sustain the whole sketch. This is supposed to be a movie with character arcs and some sense of plot. We get all these minor characters and no chemistry between the cast.

Carol is neurotic and picky about men. Lauren (Leslie Mann), Dustin (David Duchovny), and Dieter (Pedro Pascal) are in an on and off-again relationship. Sean (Kegan-Michael Key), who is obsessed with promoting his book, and director Darren Eigen, Fred Armisen) went to Sundance indie darling, and now he’s a blockbuster movie star. He doesn’t want his minimum wage job. Krystal (Iris Apatow) is gen z, so she really enjoys tik-tok.

It is amazing how Judd Apatow (who also wrote this film) could have gone from a good filmography to this disaster. Perhaps he needed something to distract himself from the pandemic. But did we have to see it? The most important thing about being an artist is that there will be art pieces that don’t work, but they can help you achieve something better. The Bubble is an example of this. While it may have seemed great in theory, the execution was a disaster. Because Apatow is a well-known director and so many bankable names involved, the film was always going to have a market. It was the film I saw precisely because I knew all of these people and I have never regretted it.

Harry Trevaldwyn is the only positive thing about this movie. He is consistently hilarious. Guz Khan also adds some humour, but he vanishes very early in the movie, and the comedy goes with him.

The Bubble runs for just over two hours. That’s too long to spend time on a movie with nothing to say.