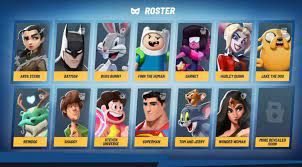 Multiversus’ appeal as a platform fighter is dependent on its roster. The list of playable characters in the title will be a key part of keeping players engaged. Based on initial revelations, it includes a lot of popular characters.

Multiverses were first rumored to include playable characters from DC Universe, Game of Thrones, Looney Tunes, and many other media. Now that the list has been officially revealed, we canbetter understandf its appearance and the 13 first names. Continue reading to learn more.

The popular intellectual properties of twelve of the 13 names on Multiversus’ roster are responsible for 12 of the 13 currently listed. The exception is the cute Reindog. Each playable character can choose from five playstyles – Assassin, Bruiser Mage/Ranged Support, Tank, or both – and has access to two special abilities. Here is the current list:

Multiversus’ roster is expected to grow as more seasons add new content to the free-to-play title. There are three game modes confirmed so far: 2v2, 1v1, and 4-player free for all. These games cater to both solo and cooperative play.