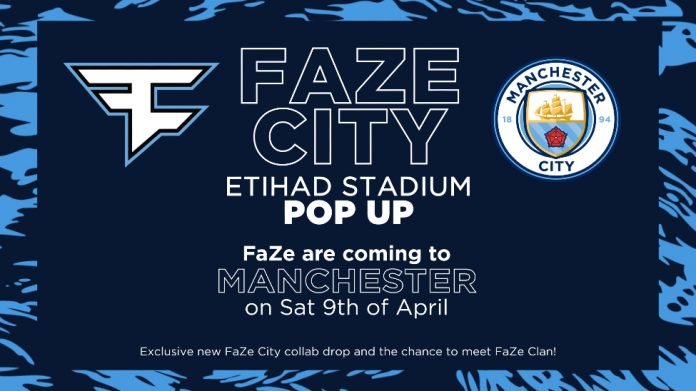 Faze Clan UK fans are excited to announce that Faze and Man City have teamed up for another merch drop. Faze Clan has announced their first-ever UK pop up event to celebrate. This event will be held at Manchester’s Etihad Stadium, collaborating with the Manchester City football team.

Faze Clan has held meet-and-greets in the US, but UK fans will be happy to know that this event is still happening. This pop-up is the first one outside the US. Faze Clan and Man City will benefit from the crossover, which will provide a great opportunity for them and their fans. The collaboration is not new for the two teams. In 2019, they released co-branded merchandise 2021. This cements their partnership over the years with merch and content creation.

At the event, you’ll have the chance to buy from a new merch drop and meet your Faze Clan favourites in person. The Faze Clan has confirmed that they will soon be releasing more information on the event. We certainly hope so. The event is just three weeks away. As more information becomes available, we’ll keep you updated.

When will the Faze Clan or Man City events take place?

The tweet below shows that the event will be held on Saturday, April 9, 2022. This is the day City plays Liverpool FC. Tickets can be purchased through Man City’s ticket site. More details will follow.