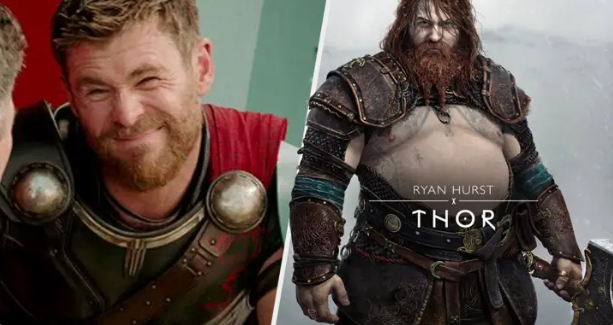 Devs of ‘God Of War Ragnarok’ Explain Why Their Thor isn’t a Chris Hemsworth Clone.

Some of the concept art for the characters of God of War Ragnarok may be familiar to you. A variety of artwork was released to showcase the differences between the casts and introduce the new cast. Because many people had preconceived notions about the appearance of the god of thunder, one character has been the focus of much discussion since the artwork was released. The Ragnarok developers have been discussing why Thor isn’t built like Chris Hemsworth.

Talking to Game Informer Eric Williams, director of God of War Ragnarok Eric Williams, and Cory Barlog, the creative director, spoke about the artistic choices made in making Thor and why he looks like he does. It all comes down to the simple fact that they wanted him to look that way. Makes sense, huh?

Director says, “We just want him be a big boy. Marvel’s interpretation is one. It’s fascinating. It was interesting. They are present immediately. It’s not just because they have muscles. It’s just like a wall made of human beings. This is the wall of God, you see, and it’s why it’s so important.”

Barlog continues to state that there is “something so wonderful in that not everything has to be this glistening muscular hulk type of concept to still remain fantastic, powerful, and intimidating.” He’s correct. Although you might not believe Thor looks muscular in the concept images, I challenge you to fight him. It’s unlikely you would want to, wouldn’t you?

The physique of this Thor matches the physiques of strongmen who compete at the highest level of the sport. They aren’t chiseled. They are big, but they don’t always look like the Hollywood version.