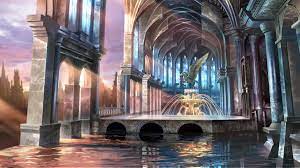 We are back with our semi-regular celebrations of the greatest stages of fighting game history. You can read some of the previous entries by clicking this link. But for now, we are taking a short trip back in time to a tale about swords and souls that will be retold forever.

You can choose from a variety of stages in Soulcalibur. There are so many amazing stages in this series, and it’s difficult to choose a favorite. Soulcalibur 2’s Lakeside Colosseum is a wonderful combination of music and history. SCV’s Tranquil Wasteland, on the other hand, is as close as Soulcalibur can get to emulating Tekken 5’s Moonlit Wilderness. Soulcalibur 2’s Inferno stage’s scorched hellscape is etched in my nightmares, along with Inferno’s creepy skull face. But that’s another story.

It would be a mistake for a series to proclaim “welcome back at a new stage in history” every chance it gets. Soulcalibur avoids this. If you are on the receiving end, you will probably say a stage is bad. But that’s only the scrub in your mouth. Soulcalibur III’s Lost Cathedral has always felt special.

Lost Cathedral is located in an undiscovered area of Europe. It feels as if it’s as far away from civilization as you can get when fighting in the game. Although the Cathedral was built by someone, the beautiful scenery, flowing water and almost heavenly architecture give the Cathedral an otherworldly feel. It’s a room that feels like a final boss fight in an RPG. This is funny, considering it’s the second stage of the Arcade mode.

According to official game lore, the Lost Cathedral is among many battlegrounds where Siegfried and Nightmare meet, with a complex history. The series has a lot more lore, but suffice it to say that there is no better place to witness a fateful showdown between two titans with the sound of their huge swords echoing across the ethereal structure. The stage is stunning in its design, and the world-building surrounding it pushes the quality further.