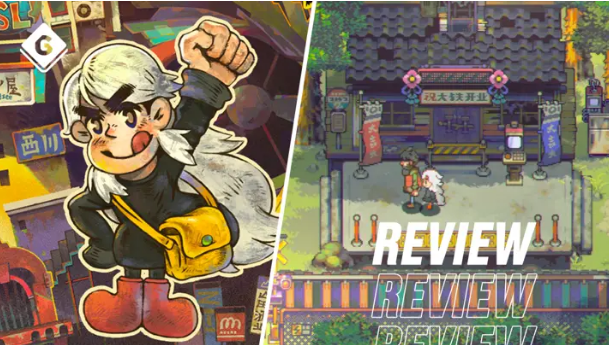 My time in the Eastward world is now over. My 30-hour adventure took me to ancient ruins and frightening factories. I have made friends for life and enemies for life. I have traveled across a strange, surreal, and breathtakingly beautiful world, which never ceases to amaze me.

Eastward is a genuinely fantastic piece of work. It’s a brilliant, touching, and strikingly confident videogame that I will be recommending to my friends and family for many years. Even days later, I am still walking around in a sort of stupefying haze, as my love for Eastward and its characters occasionally overwhelm me.

While it may look like a love letter to classic RPGs, Eastward is so much more than meets the eye. It has hints of The Legend Of Zelda’s combat, dungeons, and puzzle-solving. There is also a hint of mother 3 in the story which seamlessly switches between post-apocalyptic nightmare and childish wonder at the touch of a button. It’s the way the game blends these elements and builds its own stories that impress. Eastward’s many victories are made even more impressive by the fact that this is Pixpil’s first game.

Eastwardplaces players in the muddy boots of John, who is so quiet Link looks like a host on a late-night talk show. John is a “digger” who lives in relative safety on Potrock Isle. Many years ago, this underground settlement was built to escape from the Miasma, which has allegedly destroyed the world above.

John spends his time in the tunnels, taking care of Sam, a young girl that he discovered deep (er ) underground, one day, resting in an unearthly pod. Sam soon discovers that she is not what she seems and her bizarre powers and insistent belief in a future beyond Potrock Isle are a reality.

It’s not surprising that the majority of Eastward is spent in navigating the world above. John and Sam are traveling together to discover the truth about Charon’s terrifying powers and the Miasma.

Eastward is perhaps most proud of its story. To reveal too much would be to diminish the essence of what makes this experience so unique. Eastwardis not afraid to travel to the most challenging places… but it doesn’t lose sight of its senses of humor or inherent charm while doing so. It’s an unforgettable journey with charming characters and different towns and cities that will linger long after John and Sam have to return on the road.

Eastward is my favorite thing about it. It combines mundane slice-of-life stories with dungeon-crawling adventures. John and Sam will one moment be wandering the streets of New Dam City, trying to find the right ingredients for a cooking contest. They’ll soon be covered in zombie blood as they battle their way through a terrifying glimpse of what the Miasma can do. These quieter, more leisurely moments might feel like padding in a lesser game. Eastward uses this to help the player connect with the world and fall in love with it. This makes Zelda-like moments like the one in Eastward feel even more important. This is a testament to the game’s writing that it manages to balance this delicate task so well.

It helps that Eastward is a stunning game. The vibrant and detailed pixel art creates a beautiful effect. Although the post-apocalyptic world of Ghibli is very reminiscent of some of the most exciting Game Boy Advance games, modern graphics add a unique flair that brings scenes to life. Pixpil is a shining example of solid art direction in a world that focuses on volumetric lighting and ray tracing. Each area impresses in its unique way, from junkyards full of forgotten treasures to ramshackle towns with narrow streets and old billboards to the sprawling cities filled with old billboards.

Joel Corelitz’s haunting soundtrack deserves a special mention. It plays an integral role in punctuating some of the best moments. He skillfully switches between grand adventure, creeping dread, and vice versa. For about a week, the New Dam City theme has been stuck in me. It will be gone when it is finally released from my brain.

You’ll spend your time exploring the world’s many dungeons and helping John and Sam to have a peaceful life. These areas allow you to switch between John or Sam with a tap of a button. This serves two purposes: combat and solving puzzles.

Sam’s abilities can be used in combat to freeze enemies while John will wallow them with his weapon choice, a large frying pan. The puzzles are more complex, and the pair can be divided at any moment. This allows for dual-route challenges, where they make clever use of their respective abilities. John can break through walls and bomb walls and cut down dangerous vines. Sam can sneak through tiny gaps to clear deadly Miasma.

In many dungeons, the two will split up to help each other out. Each area is built around a different mechanic or item. It is sporadic for Eastward to have any ideas that go beyond their scope.