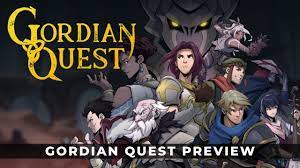 To find the right game to replace Slay The Spire, the reigning king of roguelike deckbuilders I have been playing every possible game, including Gordian Quest.

Mixed Realms, a Singapore-based Indie Studio, developed the game. It has been compared to Slay the Spire.

There are currently three game modes. There are a story campaign, a climb mode that is similar to other deckbuilders, and a PvP mode.

Gordian Quest is now available in Early Access via Steam. For your region pricing.

It is quite easy to follow the story in campaign mode. Humans lived peacefully with the Vanai long ago. They were angry at the gods for their thirst to learn and were banished. Humankind was left a cursed, fractured, and filled with monsters.

Your heroes are determined to cure the curse that has affected the regions that have been divided.

Acts are divided into Acts. Act 3 is the most recent. The party treks through the Vanai’s former home, the Faded Peaks in the new content. These stories can be played as separate pieces or in a sequence by carrying your progress forward.

You can choose from the classic DnD archetypes to create your party. Each character has four subclasses that determine their stats and their starting ability deck.

Personally, I was not interested in the plot. I found myself skipping over dialogue and wanting more action. This isn’t a reflection of the game, but rather on my ability focus. It doesn’t seem likely that anyone looking for deep, meaningful narratives will find it here. Despite this, I’m open to being proven wrong by the final Act.

GAMEPLAY – A LOT of IDEAS…

For fans of the roguelike deckbuilding style, combat seems to be the easiest aspect of the game. Each turn, your heroes will draw one card and then can play as many cards as their Ability points allow. Combat requires additional planning because three heroes are drawing the cards simultaneously.

There are also two grid sections that can be divided across the battlefield. They vary in size. You can spend Ability Points to move heroes and enemies around your side of the battlefield. You can use them to avoid damage or deliver an attack with a limited range , adding another layer to your strategy. It gets more complicated with special abilities that allow you to summon allies, place traps and add battle modifiers like barricades, which will prevent certain attacks from being destroyed.

The map is filled with nodes representing different activities. Some are compulsory, others optional. They all cluster around a central hub. The party can relax, purchase gear and provisions, change members, and hand in completed quests.

It is a custom of RPGs that the party gains experience which will eventually allow them to level up. The skill points gained can be used to unlock boons that increase with character level. These bonuses may include an increase in stats or card upgrades and removal, as well as a new skill card from one the schools that the character can specialize in.

Each character also has their own equipment that grants them additional bonuses, new skills cards, and other benefits. You can also use runes to enhance any piece of equipment for more power.

Event nodes can be resolved by rolling a 20. There is also an exploration mini-game at some nodes that allows you to get gear, resources, and healing. You can have a campfire, upgrade your skills, and get temporary boons. There are shrines that make certain combat nodes more difficult in exchange for additional loot. There are also multi-floored, multi-floored, dungeons that act as extra maps.

The tutorial is not yet available for the game. Although the developers plan to include one in the final release, for now there are only help pages. It can take a while to figure out what you are doing and how each mechanic works. Second, multiple difficulty levels in a roguelike are not something I like. It is difficult to balance a card-based game with all of the mechanics that are piled on top. The developers did not intend for every player to have the same experience by trying to balance 5 different difficulty levels.