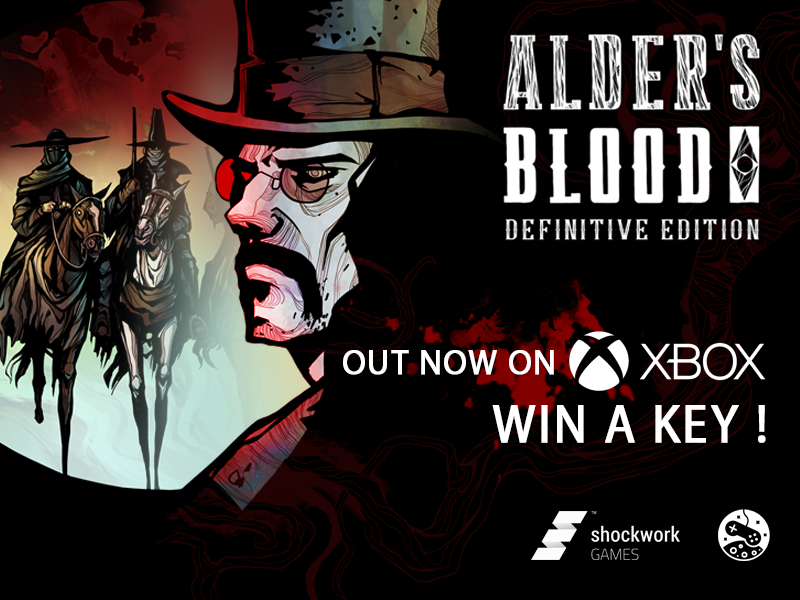 SURVIVE A WORLD THAT HAS NO GOD!

Alder’s Blood is an tactical-strategy that combines stealth-based combat with RPG elements, crafting and resources gathering and management, exploration, and rich storyline. It takes place in a dark world where humanity has killed their God and is now facing extinction.

We are giving away 10 Xbox One / Series X keys.

If you don’t win, but still want to support the developers you can buy the game for Xbox One/Xbox Series X. You can still buy the game via the Nintendo Switch, Steam and Google. If you’re interested in giving it a shot, a free Prologue is available.

# Stealth, ambush-based combat. You can outwit and outsmart all the terrifying creatures you will be dealing with. They are stronger than you and you won’t have any chance against them in a direct attack.

# Diverse, challenging opponents. All monsters can see, hear, and smell you, from werewolves to vampires. Be careful not to reveal too much of your location.

# Stamina-based characters. You must be careful about how you manage your energy between moving, attacking and casting spells. You are only a human being and running out energy can cause serious fatigue.

# A dark world that is surrounded by darkness. This world is where our god has turned his back on us. His corrupt presence can alter the intensity of battle. You can summon monsters, change the weather or transform one of these creatures into a powerful avatar according to his will.

# The exploration system of a vagabond. Your mobile base is your companion as you travel the globe. You can shelter in your camp and manage it, but you should be alert for enemy ambushes.

# A unique blend of dark Victorian fantasy, wild west and Victorian horror. You will be immersed in a world that is completely different to the one you are used to. The universe was shaped by struggle and where humanity has not been allowed to advance or develop any technology.