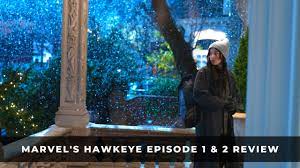 Hawkeye’s fan reaction has been fascinating. Many fans were disappointed by the little screen time Hawkeye received in 2012’s The Avengers. They wondered if they should have featured him. The character also received a comic by Matt Fraction, David Aja, and that has been hailed as one of Marvel’s best. Fans demanded a series or a movie for their favorite characters. With Disney+ finally offering a miniseries featuring Marvel’s archer, admirers finally got what they wanted.

TABLE OF CONTENTS1) The Story: Back on Ground2) Characters and Performance: A Reluctant duo3) Cinematography, Sound: It’s Beginning to Look A Lot Like Christmas4) Editing and Pacing: Transition from Films

STORY: BACK ON THE GROUND

Marvel’s Hawkeye is about Clint Barton spending some much-needed family time in New York City. As he celebrates the holidays, Ronin, a figure from his childhood, appears to encourage him to take action. He meets Kate Bishop, a young archer who is also in this situation. Clinton is entangled in a larger criminal conspiracy, which has devastating consequences. It is refreshing to see the MCU tell a story from the street. Even though Hawkeye has fought Thanos and Loki, he is the ideal character to tell the story.

Clint felt like an all-star on the Avengers, even though he only had a bow & a quiver of arrows. He was always falling but always getting back up. It feels more like he is in his element to take on street crime. The first two episodes are a fascinating mystery with many threads for the future. They bring back Clint’s role as Ronin in Avengers Endgame. It is wonderful. They effectively stressed the fact that one man was able to take down many criminal organizations. When everyone believes Ronin is back, Clint starts to realize the extent of his problems.

It would be an understatement to say that Hailee Steinfeld is a great actress like Kate Bishop. It was obvious that the casting announcement made sense when it came out. Finally, it was worth the wait to see her in action. An actor playing a comic character is best described by how they can’t imagine anyone else. Steinfeld is a great example of this. She is perfect as Kate Bishop. But she is still very inexperienced as a hero. You can’t help but feel super invested every time she appears on-screen.

As we move forward, her chemistry with Jeremy Renner creates a wonderful dynamic. Kate is a huge Hawkeye fan, but she’s over-eager and untrained. Clint is a similar energy to Danny Glover in the Lethal Weapon series. Clint has no patience and wants to get rid of all this. We understand his desire to wrap this up and spend Christmas with his family. As they get to know one another, the second episode shows off their relationship. It is fun to see their relationship progress towards the end of the episode.

The Tracksuit Mafia is also our first glimpse of the villains. The Tracksuit Mafia is a Russian gang of mobsters who wear tracksuits and often say, bro. Although some viewers may think they are too silly, it is a great way to show that they have a sense of humor. The Tracksuit Mafia feels the same as they did in Fraction and Aja’s runs. Some lines and the constant use of bro get a real laugh. The sheer number of them, and their presence everywhere, makes it a serious threat to our heroes.

CINEMATOGRAPHY AND SOUND: IT’S BEGINNING to LOOK A LOT MORE LIKE CHRISTMAS

This show has a clear advantage: it brings back the nostalgic feeling of Christmas. It feels right to look at New York City in Christmastime. It is breathtaking to see the Christmas lights and snow sparkle on the nightlife. This captures the holiday spirit of tourists visiting NYC. Multiple shots are taken of the Rockefeller Center Christmas Tree. This helps to make it feel more like a holiday show.

Even tiny bits of the score contains Christmas music. This is the only place the score becomes visible. It’s quite surprising, considering that it was composed by Christophe Beck. Beck has done amazing work in the MCU, such as the WandaVision series and the Ant-Man series. His score is not memorable. Rogers the Musical is the only musical thing that stands out. Clint and his family go to the Broadway musical in the first act. It’s hilariously cheesy and such an earworm.