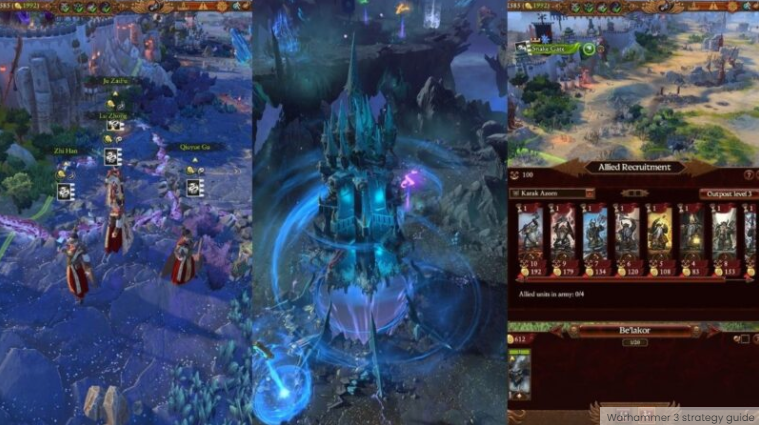 Total War. Warhammer 3 presents a dangerous, open-ended, but challenging playground that will test players’ ability to think quickly and make the right decisions under threat from Chaos’s surprise attack, invasion, or corruption. Warhammer can be overwhelming for beginners due to its many factions and powerful magic system. There is also a complex web of diplomatic relations. Let’s get you started with some Total War: Warhammer3 tips.

A strong economy and well-developed infrastructure are essential for the long-term survival of many empires. Settlements can reach at least three tiers or five in the case of large cities and province capitals.

Players will need to increase their population surplus to build settlements at the highest possible level. You should activate commandments and construct structures to increase the growth rate of your province as soon as possible so you can later transition to more profitable buildings.

To Increase Your Income, Use Heroes

Although not all factions will benefit from this tip, Kislev or Grand Cathay both have Heroes that can increase passive income when they are present in a province. To increase your province’s profitability, having these Heroes can be very profitable. This economic strategy is most effective in the middle phase when the small gains have a more significant effect.

No matter how difficult, especially at higher levels, AI faction will send armies to the most vulnerable settlements. This could be deep within your heartland, leading to wild goose chases that can delay your expansion plans. Garrisons can be used to help stop the AI and strengthen your faction by deploying armies throughout your entire bloc. Even if an AI begins to besiege settlements with garrisons, they will usually hesitate to attack immediately, giving the player the time to build a relief army to assist the weaker defense forces.

Players will likely loot so many magical items or ancillaries during a campaign that they don’t know what to do. You could store them in storage, but it’s better to use them as salvage or fuse.

You can choose two items of the same rarity from the character item selection panel and combine them to make one of the highest rarity levels. If you are in financial trouble and need extra cash, you may be able to sell as many items or ancillaries as you like.

The Warhammer 3 diplomacy system was reworked to make allies easier to use and give players more opportunities to work with their comrades to achieve a common goal. After you have signed a military or defensive alliance with a faction in the diplomacy screen, players can check if they can build an outpost within a capital city of that particular ally.

Outposts are expensive to build and provide a small garrison to the settlement. This will enable the owner to recruit units from an ally. Your territory will be protected by AI allies who will tend to set up their outposts.