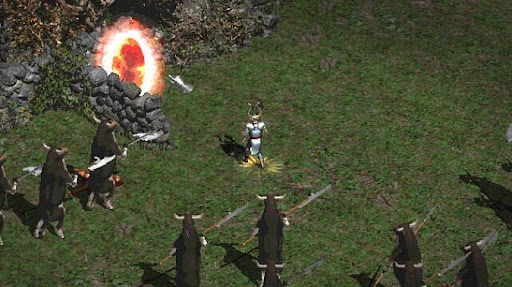 The Secret Cow Level , a.k.a the Moo Moo Farm is an easter egg area in Diablo 2 with very special properties. It can be accessed through a red portal by cubing together a Wirt’s Leg (which can be found in Tristram’s top left corner), and a tome of town portal. Tristram can be found in Stony Fields, and can also be accessed via a red portal.

One thing that makes the Secret Cow Level (other than it’s full of axe-wielding cows) is that the monster density is incredibly high here. The area of the Cow Level is relatively small, you can run around it within a minute. Despite the relatively small area, there are 350-450 enemy Cows that spawn here.

The cows have special drop chances for a variety of items. The Secret Cow Level is optimal for rune farming, since the more monsters you kill the higher the chances of finding high-runes. Other than runes, it is also the best place to farm for charms and socketable base items, as the cows have very high drop-rates for both.

Choosing your character build is an important step in order to farm this area effectively. As the monster density is high, you need a build that deals a huge amount of Area damage. Such builds are the Javazon, the Poison Nova Necromancer, the Blizzard Sorceress and the Lightning Sorceress. Each build has its pros and cons, the most definitive one being the cost of a build.

The Ladder Season is about to be released on the 28th of April, after which everyone starts from level 1 with no gear. Out of the 4 mentioned builds, only one, the Blizzard Sorc is able to farm efficiently without having to invest heavily in gear, or needing to take a lot of time farming for it. You will be able to farm the Cow Level efficiently in early-season gear, and your performance will also stay optimal as you start switching to magic find items and charms.

Make sure that you have good defensive abilities against physical melee damage, as most of the damage delivered by the cows is physical. You can do so by wearing physical damage reduction items (capped at 50%), having a high amount of life, but most importantly – staying away from big mobs and casting Blizzards from a distance. In addition, block chance also comes handy, and use walk instead of running as your defense diminishes while you run. Make sure to equip yourself with healing potions, or full rejuvenation potions.

The quickest way to move around the Cow Level is by teleporting, however since the area isn’t very large, you will only need to cast a few teleports to get from one Cow pack to another. You can also “shepherd” 10-20 monster cow packs and lead them to form a huge, often 100+ monster giant pack, which then can be attacked by Blizzard very efficiently. Due to its special qualities, the Cow Level requires a unique playstyle and surely needs some time to get used to, but you will quickly find out that it’s probably the most fun part of the entire game.