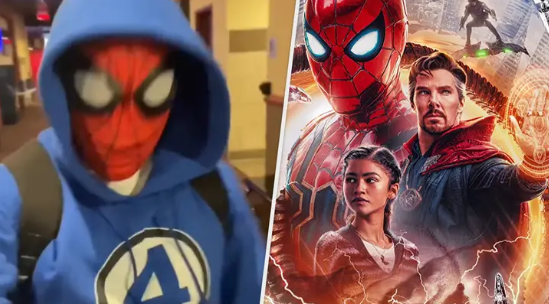 Spider-Man No Way Home was a movie I loved so much, and I saw it four times at the cinema. That seemed a bit excessive in the context of a pandemic. It turns out I have nothing to envy about the superfans.

One man from Florida holds the record for the most screen times of the same movie. Ramiro Alanis has seen Spider-Man: No Way Home a staggering 292 times. This is explained by the Guinness Book Of World Records, which adds up to 30 consecutive days. This is a literal month that he spent watching Spider-Man. I’m not sure if I should be amazed or afraid.

Ramiro didn’t let Ramiro down and returned to the cinema to use Spider-Man: No Way Home to reclaim the title. I was tempted to try and beat Venom, but Venom: Let There be Carnage instead is a faster 90-minute film. However, I was able to watch the flick once.

It is not clear if anyone will try to beat Ramiro’s record right now. It’s not likely that anyone would enjoy the idea of spending 30 consecutive days watching the same movie. This is especially true when Ramiro seems to be coming back swinging after the next Spider-Man film. This man is simply unbeatable.