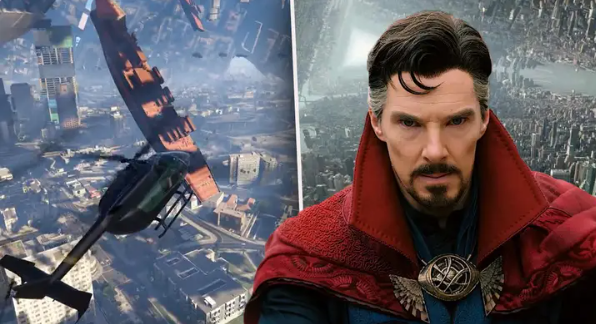 There’s no better way to spice up a game quite like a mod, and there are some incredible options out there. One fan-made creation allows you to play the entirety of Elden Ring in co-op mode, and you can now enjoy Skyrim with stunning ray tracing.

Let’s not forget about the hugely exciting Fallout: London mod, which is essentially the size of an official DLC. The possibilities are endless and GTA Online is one such game that is full of mods. The problem is, that not all of them are there by choice.

Twitter user videotech_ recently opened up GTA Online only to discover that they’d seemingly entered a scene from Marvel’s Doctor Strange. The user wrote, “I thought I’d step in GTA Online on PC thinking I might be fine under a new name … turns out I am wrong. This game is a mess.”

The lobby that videotech_ entered had seemingly been modded, adding an inverted map on top of the regular one. As such, skyscrapers hung down from the sky creating some very, very weird visuals. As videotech_ flew around in a helicopter, a cargo ship could be seen stranded in mid-air.

The hack is hugely reminiscent of the mirror dimension from Doctor Strange which saw the Sorcerer Supreme warp New York City into a twisted optical illusion. I’m also getting very strong Inception vibes.

GTA fans flooded the tweet to share their thoughts on the hack. Axiom_Juno wrote, “The f**k did Dr Strange do?” whilst TapTapClickTTV also shared their own woes, “Yes, it can be this bad. I’ve had a modder follow me for several months and every time I logged on, they would join and just ruin the server.” As cool as this looks, I imagine it would get tiresome after a couple of minutes.