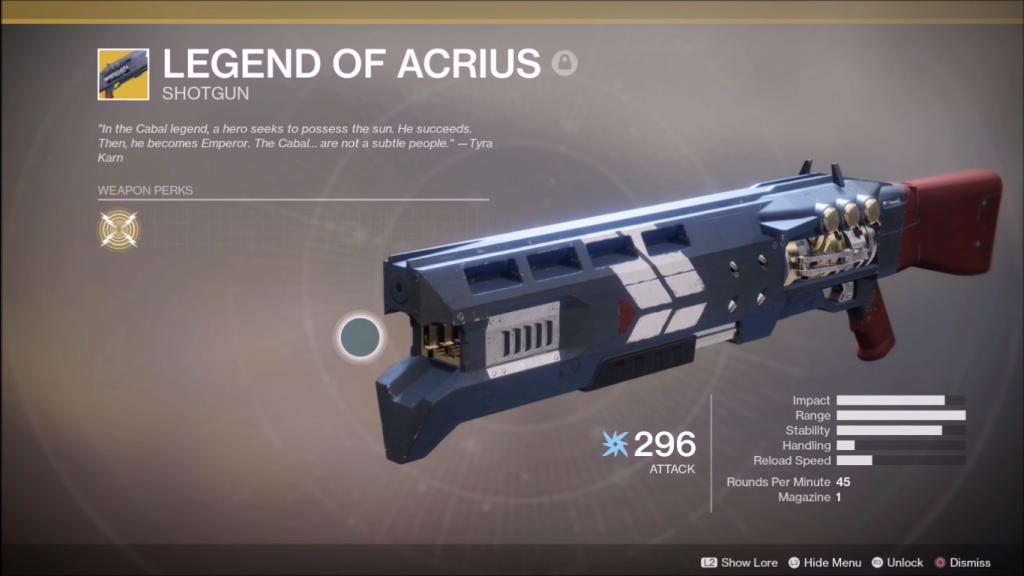 With each assault Bungie has presented, there has been an extraordinary weapon that accompanies it. In Destiny 2’s Leviathan Raid, we will get the Exotic Shotgun called The Legend of Acrius.

The new strike extraordinary weapon sneaks up all of a sudden, and can deal with any adversaries in a moment, in any case, getting this weapon is no simple undertaking. Like other outlandish weapon missions, the strike weapon journey has numerous means and this guide will help you through each progression.

How To Get Raid Exotic Weapon Legend of Acrius In Destiny 2:

While grinding Destiny 2, players might have acquired an item called On The Comms. This item drops from Red Legion soldiers on Earth, Nessis and Io. If this item has not dropped for you yet, start killing Cabal Enemies and it will drop for you eventually.

Once you have the item, it will ask you to kill multiple Red Legion Soldiers on Nessis, until you collect 5 Red Legion Communications. You can collect these by simply killing Red Legion soldiers, and these items will drop randomly. After you have collected 5 Red Legion Communications, your next objective is to complete the Leviathan raid with your friends. After this point of the quest, you will find a few spoilers that you might want to experience for yourself, so complete this next step and come back to this article for further guidance.

When you defeat the Cabal Emperor, you will get the next step in the Exotic Raid weapon quest. For the next step, players will receive an Imperial Invitation, and you will have meet Benedict 99-40 at the tower.

Now that you have the Imperial Invitation, head to the tower and look for Benedict 99-40. Benedict 99-40 is the sweeper robot that you might have seen around the tower. This robot is the new raid vendor and he will give you the next step of the Exotic raid weapon quest.

For the next step, players will have to complete ‘The Arms Deal’ Strike. It is located in the EDZ and has a recommended Power Level of 300, so make sure your ready for the challenge. Like in last week’s Nightfall, The Arms Deal Strike is timed, and you can extend the time by destroy Vex crystals that can be found around the map.

Once you complete these challenges, head back to Benedict 99-40 and he will send you on a new quest. This time, you will have to acquire 100 Emperor’s Seals from the Leviathan raid. This part of the quest might be bugged, as players will have to complete the raid 11 times in order to get this quest to 100%. No one knows if this quest is bugged or maybe, this is exactly how it’s suppose to be.

If you manage to complete the previous step, the next part of the quest is just as hard. After you get the 100% on the Emperor’s Seals quest, head back to Benedict and he will send you on a new quest. This quest requires you to complete the Leviathan Raid on Prestige difficulty. The Prestige difficulty is not out yet so you can not complete this quest at this moment, however, as soon as it arrives, players can complete this quest and unlock the Legend of Acrius’s full potential.

Hopefully this guide helped you progress through the quest for the Legend of Acrius Exotic Shotgun. Destiny 2 is now available on the PS4 and Xbox One. If you are having a hard time completing the Leviathan raid, click here for a guide on how to complete it.